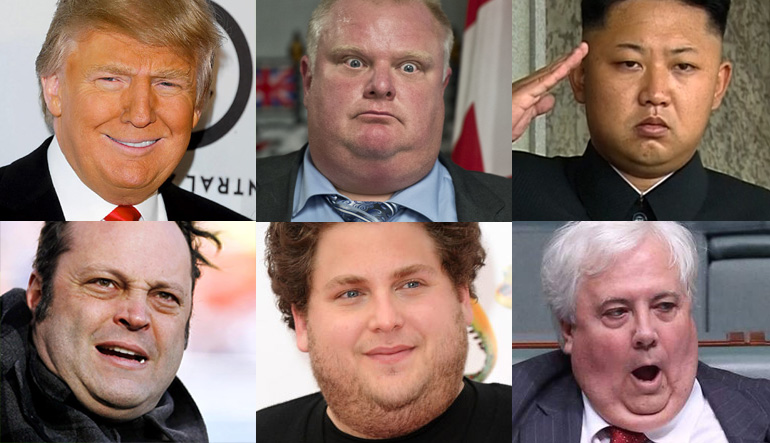 10 Aug How To Avoid a Double Chin

Posted at 19:57h in Embarrassing Issues by PRZMAN

Have you ever watched one of those politicians on TV who delivers a speech like he’s in charge of the Pearly Gates of Heaven? He picks on all the wonderful people in the LGBA community, but yet he’s probably gay; he’s against prostitution, but gets caught with hookers in airports. Essentially, he’s the guy with is supposed to be representing you, but he acts as God’s official legislator with zero morals.

While Men like that are hideous due to their lack of integrity, there’s something else that’s both ugly and Grooming-related that all these Saint Scumbags seem to have in common—double chins. Every time I turn on a news station I think to myself, “Where is this Congressman’s neck?”

As men, why do we let ourselves go and allow this happen? Most men have no idea that they have developed double chins, which are unsightly things that make you look dated and out of shape. To help you avoid such heinous embarrassment, I’ve compiled tips on how to find out if you have a double chin, and what you can do to prevent this grooming faux pas.

Start with some awareness

Take a look in the mirror, then check back at photographs from 6 months ago—honestly ask yourself if you notice anything different. Has your Subway diet, the banana splits you sneak in at night, and your lack of sleep affected your handsome manly bone structure? If its has, then get your shit together, dude and listen up.

Besides hindering your thyroids and increasing your chances for autoimmune disease, gluten is the protein found in wheat, barley and rye that gives breads and cakes their delicious doughy texture. It can also cause your body to experience bloating and fatigue; this affects digestion and thus, contributes to weight gain. To prevent excess #chinning, stay away from white and whole wheat flours, breads and pastas, as well as tortillas, cookies, crackers cereals, pastries…and beer.

Alcohol is all fun and games until your face puffs up. Beer, wine, vodka and whiskey dehydrates you, meaning you actually get thirstier after you booze up. Your body responds to this by storing as much water as possible in different areas…and your face is no exception. A few Jack & Cokes on Saturday night will have you waking up on Sunday with a bloated face; drink every night and that double chin will stick around for a while.

Pump up the cardio

Fat on the chin amasses just like fat on any other part of the body, which means you have to take the same steps to get rid of it as you would if you’re trying to trim your waistline. Read: since you can’t run your face on the treadmill, you have to target and work on your whole body to chisel your chin. Cardiovascular activity like jogging, biking, running, walking and power yoga will help you lose weight overall, including the fat you’re wearing on your face. But keep in mind, the longer you wait to target the problem, the more damage the fat and the extra weight is going to do to your overall appearance. And let me tell you—extra flab on your face is not a good look.

If you’re someone who doesn’t sleep well, or someone who’d rather binge watch House of Cards on Netflix than get the recommended 7+ hours of sleep, being tired the next day is only one of your many problems—you’re also probably waking up to a swollen, puffy face. Lack of sleep is sometimes a cause of excess caffeine, alcohol, and processed salty and fatty foods; sleep is very important for a functioning metabolism and a healthy digestive track, and when those aren’t working properly, it shows in your face and overall appearance.

Right when you wake up in the morning (after brushing all the bacteria out of your mouth that has accumulated during sleep), drink a glass of water, then immediately wash your face—if you see or feel any sort of puffiness, apply an ice pack to your face to help jumpstart your blood circulation.